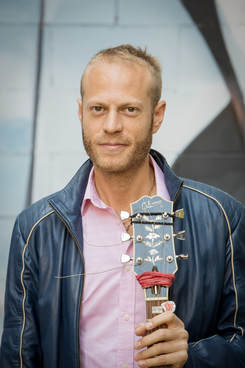 Rotem Sivan is taking the NYC jazz scene by storm. Described by DownBeat Magazine as “a remarkable talent and a welcome new voice on the scene,” he completed his studies in both classical composition and jazz with honors in Tel Aviv & NYC. Sivan tours with his trio and has performed in countries such as France, Italy, Spain, Germany, Austria, Belgium, Poland, UK, Slovenia, Mexico, Chile, Costa Rica, Puerto Rico, Israel, USA, and Canada, among others, and has given workshops around the world in top universities and schools.

Upon graduation Sivan moved to NYC to pursue his passion for jazz. While making his first steps in the local scene he was also studying at The New School for Jazz & Contemporary Music. Since his relocation, Sivan has performed with many prominent musicians, including Peter Bernstein, Ari Hoenig, Ben Street and Ferenc Nemeth.

In 2013 he released his debut album “Enchanted Sun” on SteepleChase Records, followed by his second album “For Emotional Use Only” on Fresh Sound New Talent Records. Jazz critics and magazines around the world praised both albums receiving 4.5 stars on Downbeat Magazine. Sivan released his third album "A New Dance" in 2015 with bassist Haggai Cohen Milo and drummer Colin Stranahan, which was again met with critical acclaim.


"He lets you hear the innate sound of his instrument, using classic jazz-guitar tone with dynamics and a searching quality to his improvising.. He attains a kind of private language.. It’s the kind of thing that makes you listen harder."
New York Times, Ben Ratliff