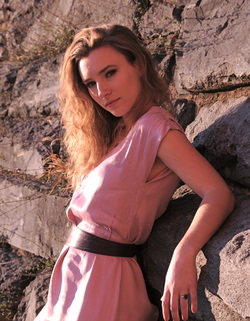 Andrea Wood is a New York City based vocalist, arranger and composer.  Originally from Washington DC, Andrea released her debut album, “Dhyana”, in  2011 which was widely reviewed and enjoyed international radio play.  In addition to her own group, Andrea performs regularly in DC and New York City with Sleep.Shy, Afrikan Rhapsody, and The Hot Club of DC and has been featured on several albums including two of Will Armstrong’s releases and a recent recording with Bizzy Bone of BoneThugs N’ Harmony.

Andrea studied classical voice and piano at the prestigious Duke Ellington School of the Arts in Washington D.C. and went on to earn a Bachelor of Music degree in Jazz Performance at Michigan State University in May of 2009.  She studied reggae music through a study abroad program in Kingston, Jamaica in 2007 and received a Masters of Music degree at The Manhattan School of Music
in 2013.  She will receive a Masters of Music Education degree from Columbia Teacher’s College in 2015.

Andrea has taught piano and voice privately for nearly ten years. She taught and co-created a Jazz appreciation class through the Washington Jazz Arts Institute in 2010-2011 in Washington DC and performs occasionally for Jazz  at Lincoln Center public school outreach program in NYC.  She currently teaches general music and piano at Victoria Children's Group in Chinatown, NYC as well as private voice and piano at The Larchmont Music Academy in Larchmont, NY.  She has also co-directed church and children's choirs in Washington DC and is a current keyboardist, soloist and arranger for Washington DC’s children’s choir, Notebusters.