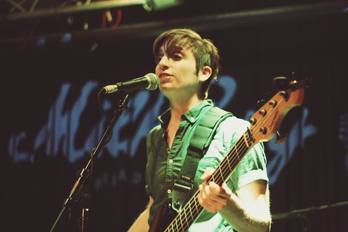 Daniel Bailen is a bassist, guitarist, singer and award-winning songwriter born and raised in New York City.  His performing experience
began at the Metropolitan Opera’s Children’s Chorus where he appeared in over 10 operas and was a featured soloist in A Midsummer’s Night Dream, singing alongside the likes of Luciano Pavarotti, Rene Fleming and Placido Domingo.

Daniel has also preformed extensively as an actor-musician. He has starred in the hit Off-Broadway show, What’s it All About; Bacharach Reimagined directed by Steven Hoggett at New York Theatre Workshop and

The Menier Chocolate Factory in London. The show was renamed Close To You: Bacharach Reimagined when it transferred to London’s West End, which Daniel also starred in. He was featured on Upright Bass, Electric Bass, Cello, Guitars and Vocals while working closely with Burt Bacharach.  The show received 4 Lortel nominations, including one for Outstanding Musical, as well as a Drama Desk nomination for Outstanding Revue.  The show was named “One of the Year’s Best” by The New York Times.

In London, Daniel performed with Bacharach on The One Show as well as the BBC’s Radio 2.

Daniel’s band, BAILEN, with his twin brother and younger sister, have toured internationally, opening for the likes of American Authors, AJR, Raul Midon, Alex Clare, Jonathan Batiste and Stay Human among others.

Entertainment Weekly has described them as having “vocal harmonies to rival Simon and Garfunkel.” They are regular guests at Madison Square Garden for the National Anthem, and Grammy U named them the best college band in the Northeast. In 2014 they won the Elfenworks Foundation songwriting award: In Harmony With Hope.

This past year the band has been cultivating a presence in London, where they have played dozens of shows, recorded with Grammy winningengineer Ricardo Damian (Uptown Funk), and have garnered a faithful following within the London folk scene as well as in NYC.