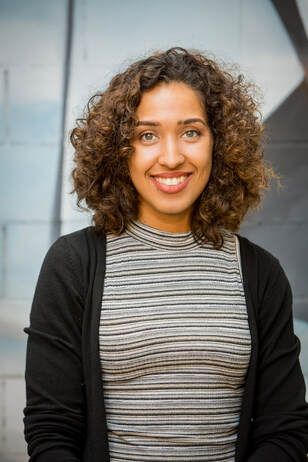 Detroit native Lauren Scales lived and breathed music even before learning to speak. The daughter of acclaimed jazz artists Charles and Gwen Scales, Lauren Scales has been performing most of her life. She began playing piano at age 4, and by 12 years old she was singing with the internationally-celebrated Mosaic Youth Theatre of Detroit.

Lauren earned a Bachelor’s of Musical Arts in Jazz Studies from the University of Michigan where she had the opportunity to study with such musical giants as Robert Hurst, Marian Hayden, Geri Allen, Ellen Rowe, Benny Greene, Sunny Wilkinson, Dennis Wilson and Vincent Chandler. In 2016 Lauren claimed Second Runner Up Sarah Vaughan International Jazz Vocal Competition, hosted by the New Jersey Performing Arts Center and judged by jazz icons as Christian McBride and Dianne Reeves.

Currently pursuing her Master of Music as a Songwriting Composition student at New York University, Lauren enjoys writing her own music, both lyrics and compositions on piano and guitar. She received national recognition for her compositions as a participant in the 2016 Betty Carter Jazz Ahead program at the Kennedy Center in Washington, D.C. Her aim in songwriting? “To create a song that is all at once uplifting, poetic and emotionally honest, and that is accessible across genres and generations.” Her aim is reflected in writing that crosses musical boundaries, creating a distinct voice from a flurry of influences from all over the musical spectrum. She embodies the soul of Motown, the storytelling prowess of jazz legends Nancy Wilson and Billie Holiday, and the excitement of Led Zeppelin, all in one breath. Blending her jazz background with soul, R&B, pop and classic rock influences, Lauren also enjoys taking classic tunes and re-harmonizing them into her own eclectic style.
​
In addition to performing, composing and writing lyrics, Lauren is an avid student of poetry, finding inspiration from the likes of Kahlil Gibran, Paulo Coelho, and Edgar Allan Poe. She writes poetry centered on themes of love, light and the role of perspective in our lived experiences.
​