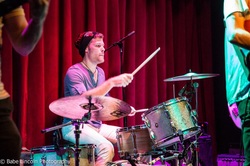 New York City Drummer, Percussionist, and Composer, Rick Martinez enjoys a diverse career fusing together and performing countless different genres and styles. Having studied classical Percussion in his youth at Baltimore's prestigious Peabody Conservatory, he has performed as principal timpanist with the Peabody Youth Sinfonietta, percussion and timpanist at Tanglewood music festival and has also performed in the Berklee World Percussion Festival among others. He has performed genres ranging from classical to jazz and heavy metal throughout the United States, Europe and Caribbean. Rick holds a bachelors degree in jazz performance from New York University, and has had the privilege of studying with jazz greats as well as pillars in classical percussion including Tony Moreno, Wayne Krantz, Mike Richmond, Dave, Pietro, Tim Genis, Jonathan Haas, John Hadfield, Martin Wind and Dafnis Prieto.

Since completing his undergraduate degree, Rick has taught privately and as a teacher/producer at Power Chord Academy for kids. He provides his students with the tools and techniques to play their instrument with confidence and clarity no matter their age or ability.
​