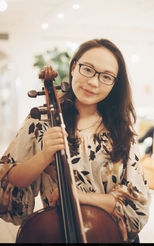 Sasha Ono is a freelance cellist and music educator in the New York City area. Recent performances include work with Grammy Award-winning jazz musicians, Mozart in the Jungle, Streetlight Manifesto, and Little Kruta Orchestra. Sasha is also a part of a new collaboration with organist Anthony Rispo in a series of concerts performing newly imagined works for organ and cello which was featured at Piccolo Spoleto. She has performed in venues such as Carnegie Hall, Radio City Music Hall,  National Sawdust, Avery Fischer Hall (David Geffen Hall), Madison Sq. Garden as well as international performance venues. She has come off a concert tour of Northern Japan, to raise awareness and funds for areas still heavily impacted by the tsunami and earthquakes.

As an advocate for making live music more available to the public, she founded Lotus Chamber Music Collective which centers on works by female, female-identifying women and people of color. The series presents concerts at informal venues and encourages audience members to engage in meaningful dialogue. The series also collaborates with local music educators to provide resources and workshops for students.
Sasha is the Community Partner and Education Director for OrchestraOne NYC which puts community involvement at the forefront of all of their season programming.
Excited about collaborating in various genres of music she also works as an arranger and producer for instrumentalists and pop singers. Sasha specializes in creating multi-layered cello tracks for singers and musicians.
Sasha is a faculty member for Youth Orchestra of St.Luke’s (YOSL) and is the former director of the Elementary and High School Brewster Central School District orchestra programs. During her tenure teaching and conducting elementary through high school orchestras, Sasha developed a unique strings curriculum focused on developing perseverance, building effective practice techniques, and learning music literacy through ear training. At YOSL, she works as a group cello instructor as well as a consultant and creator of student assessments. Sasha is also the current conductor of the String Ensemble at Western Connecticut Youth Orchestra.

Sasha received her B.A in Cello Performance under the direction of Julia Lichten at SUNY Purchase College Conservatory of Music and Masters of Arts in Music Education from Manhattanville College where she received the Fromkin Award and became a New York State Certified Music Teacher. ​