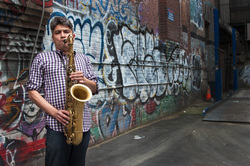 The New York–based tenor saxophonist and composer was born and raised in Texas and began performing professionally at age 16 with his father, Joe Killian, a jazz pianist and Hammond organist who worked in bands led by sax legends Sonny Stitt, Jimmy Ford, and Don Wilkerson. With a saxophone spirit reminiscent of Illinois Jacquet, Arnett Cobb, and James Clay, the twenty-first-century Texas Tenor seeks to modernize this rich lineage by developing a highly personalized compositional approach coupled with a consistent group sound steeped in simpatico and interplay.

He graduated from Texas State University in 2001 where he studied improvisation with pianist James Polk, a Grammy nominated arranger and organist for The Ray Charles Orchestra and saxophone with John Mills.  Killian performed extensively as a sideman in Austin, Houston and San Antonio before forming his own band which featured his father on piano.  At the age of 21, he released his first disc Straight Ahead, a record of standards featuring his father and James Polk on piano and the venerable Martin Banks on trumpet.  A year later, he recorded Deep Down, an album of ballads and blues featuring Polk and Joe Killian on Hammond organ and legendary G.T Hogan on drums. In 2003, he formed Com Você with vocalist Margret Grebowicz, a quintet whose repertoire consisted mostly of odd meter arrangements of bossa novas classics and Wayne Shorter tunes.  They released Candeias in 2005 for the French record label Nocturne and opened for Zé Renato on his first American solo tour.

In 2006, Stan Killian moved to the east coast and immediately began working as a sideman in Baltimore and Washington D.C. He began private studies in improvisation with Gary Thomas and in composition with Larry Willis.  He continued to lead Com Você, performing in New York City for the first time in January 2007.  A year later, he moved to Brooklyn, and in 2009, after recording Com Você with contemporary jazz giants, Ben Monder, Scott Colley and Antonio Sanchez for Sunnyside Records, he formed a new quartet focusing exclusively on his original compositions.

In 2011, he released his first record for Sunnyside Records called Unified, which featured his working Quartet plus guest jazz great Roy Hargrove, David Binney and Jeremy Pelt.  Each of the guest stars played an influential role in Killian’s development as a jazz artist.  The album received favorable reviews in JazzTimes, Down Beat, All About Jazz, The New York City Jazz Record and many other publications.

Stan Killian performs with his band every 2nd Tuesday at the 55 Bar in Manhattan.