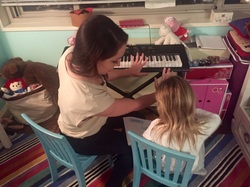 Megan Tischhauser is a singer, dancer and actor based in New York City. A Chicago native, Megan graduated in 2013 from NYU Steinhardt's vocal performance program concentrating in Musical Theatre with a minor in French.  Favorite credits include Little Becky Two Shoes (Urinetown), Silly Girl (Beauty and the Beast) and Millie (Thoroughly Modern Millie).  She played the role of Solomon's Wife in the world premiere of "Song of Solomon" which was nominated for the best play/musical at the Thespis Theatre Festival.  Megan currently works as a featured singer/dancer for LazyBones which has performed most recently at The Cutting Room NYC.  She's a founding member of the band WildTonic which performs at clubs throughout the city, including the historic Bitter End. She has also performed at Rockwood Music Hall with Elizabeth Hunter.